History of the Thomasville Buddhist Center

Mount Sinai Baptist Church of Thomasville, North Carolina, was founded in 1992 under the leadership and pastorate of Reverend Eddie Lane 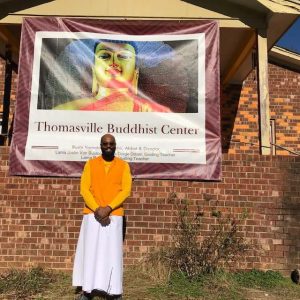 White. It grew to be a respectable, well-established ministry throughout the community.

As the congregation grew, especially among millennials, Reverend White and the board of trustees felt the call to meet the needs of the emerging population. In 1999, the ministry changed its name to reflect a more inclusive and socially engaged ministry, becoming Mount Sinai Faith, Hope, and Love Ministries (MSFHLM). The church added a food pantry and clothing ministry to meet temporal and material needs of its congregation and the surrounding community.

The church thrived until the textile and furniture industry crashed (Thomasville Furniture Industries), and left tens of thousands without employment and financial security. The furniture industry within these communities would not return. By 2007, as both the youth and LGBTQ population of the community grew among the congregation, Rev. White felt the need to retire and make space for a new minister who could lead the church into a more complex and inclusive era. 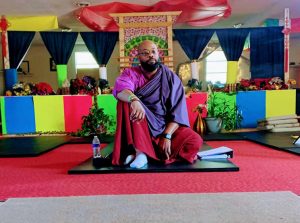 As their search began, the members wanted a more interfaith minister who could educate and offer insight into neighboring religious traditions that had always been present within the community and region. In 2008, Reverend White and the Board of Trustees selected the Rev. Dr. T. Marquis Ramsey. Pastor Ramsey had been a deeply immersed Christian minister and academician whose interfaith cross-training, experience, and consistent networking within the structure of Ecumenicity and Interfaith dialogue. The church unanimously voted to appoint him as the new senior pastor of MSFHLM.

Pastor Ramsey immediately began the work of connecting to ministers of varied denominations and faiths. Since that time, the church and its ministries have continued to demonstrate a multifaith approach to healing of human and ecological suffering. In 2011, Pastor Ramsey—who was deeply immersed in his personal practice of Zen meditation–became ordained as a Zen Buddhist monk in the newly formed Daishin Zen Budokai. Shortly thereafter, The Thomasville Buddhist Center – a ministry of MSFHLM – became a reality. Through this new initiative, Bushi has shared The BodhiChristo path with countless people.

Today after a decade of practicing the Golden Rule, the Dharma, and having an exquisite human theology of Christ as a human being, Pastor Ramsey—known now as Heiwa no Bushi–continues to lead the way in teaching what he calls “The Sacred Humanity of Jesus” throughout the world.